We set up our first bottling line during June of 2008, seven months after pressing, and 8 months after the apples were harvested at Scott Farm and Champlain Orchards.  In our 800 square foot basement we had a pallet of bottles in cartons, a little bottle sparger that screwed onto the tap over our basement sink, a plastic bottle tree to dry the bottles, a hose that ran from the tank through a pump to a small filter to our little 4-head gravity filler, then finally a hand corker resting on a piece of plywood set on two saw horses.  Friends and family had volunteered to come and help our first bottling in return for ice cider.

The team:  One person sparging bottles, one person at the filler, one person on the corker, and a final person wiping the bottles and putting them back into the cartons.  We would pull them out again for labeling and capsuling another day.  Four people working a good eight hours to bottle a little over two thousand bottles.  Not to mention two hours to get everything sanitized and set up, and another ninety minutes at the end to clean everything up. Let’s just say that labor efficiency wasn’t our priority that day – although we noticed a clear linear relationship between good tunage on the boom box  and the pace of the line. The only casualty was the guy on the corker, who couldn’t raise his right arm above his waist for two days afterward.  As his wife I took a little heat for that. But hey, we were done for the year – one day of bottling for inventory with a retail value of a little over $26,000.  One day, one year, one batch of ice cider.

As a cider producer, we are technically a Winery, so we are subject to federal wine regulations, yet we cannot use a number of wine terms on our labels because we use apples instead of grapes.  We produce our ciders with the same techniques and values as used by vintage wine makers, one harvest = one cider, but are prevented from communicating that on our labels with a ‘vintage’ date.  Or maybe we need a new word, since ‘vintage’ itself has ‘vin’ referring to grape wine in it.  Perhaps we should argue for the ability to have a ‘cidrage’ date?

There are all sorts of differences between a cider made in one annual batch from fresh, harvest-pressed apples and aged for at least 6 months before release, versus a cider made from concentrate or from apples pressed out of cold storage, fermented quickly for 2 weeks and released 2 or 3 weeks after that.  Regardless of whether the outcome is pleasing to your palate in either case, a ‘cidrage’ cider is an underdog cider because of the significant economic disadvantages of producing one batch per year.  What are those disadvantages? One is lower asset utilization, the other is higher working capital requirements.  In this post I’m going to cover asset utilization.  I’ll cover working capital later.

In my last post ‘Breaking Bad or Breaking Even‘, I described how equipment is considered an asset, to be expensed over 7 years.  Now consider the impact of producing multiple 4 week batches of cider one after the other throughout the year, rather than one batch per year for the same volume of product.  If Cidery A produces 2,000 gallons of  one ‘cidrage’ cider once per year, they might invest in two 2,000 gallon tanks, one of which will be full most of the year (the other is to pump into).  Cidery B produces 2,000 gallons of 4-week cider.  That means they can produce about 10-12 batches per year, so they only need to invest in two 200 gallon tanks.  Even though the cost of the 2,000 gallon cost is less than 10 times the cost of the 200 gallon tank, Cidery B has significantly lower equipment costs, so their fixed costs are lower, their break-even volume is lower, and their profitability is higher at each volume of production. 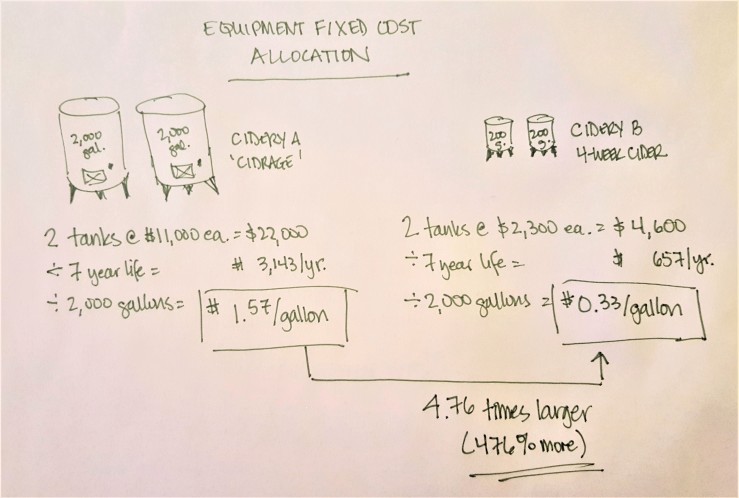 Bottling equipment is a little more complicated, but basically Cidery  B can size their bottling equipment for a 200 gallon bottling day, whereas Cidery A may need to use larger equipment capable of bottling 2,000 gallons in only  1 or 2 days.  So just to reiterate, for the same annual gallons of production, a true ‘cidrage’ producer can incur 4 to 5 times the equipment cost of a 4-week cider producer. Now that’s an underdog for you.

5 thoughts on “Vintage (Cidrage?): The Surest Sign of a Cider Underdog”